Fact of the case:

The respondent no. 1 on behalf of the above contention stated that

(i) The respondent no. 1 has been using the words ‘ARRAS SPORTS POLO’ since the year 2020 in their perfumery business;

(ii) Their copyrighted mark is substantially different from that of the petitioner’s marks; and,

(iii) even in respect of logo, the respondent no. 1is using four horses with riders on them, who are not playing the game of Polo and therefore, the same is very different from the registered trademarks of the petitioner.

The court in order to determine the substantial similarity between the trademarks of both the parties compared. 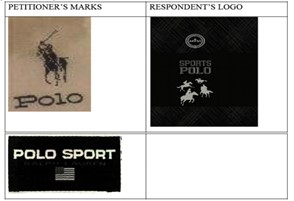 After observing both the logos carefully the court stated that the respondent’s logo is imitation of the petitioner’s registered logo. As per section 50 of the Copyright Act petitioner was made entitled to maintain the present petition. The court also focused on the test of originality of the impugned logo as per Section 13 (1) (a). The court said that after the thorough comparison of both the logo and found that the respondent no. 1 has used four horses with riders, tilted in a manner very similar to the logo of ‘horse with a person riding it while flinging his club to hit a ball in the sport of polo’, which is a registered trademark of the petitioner. The court stated that focus should be made not on the quantitative basis but the qualitative basis. Not only the horses, the respondent no. 1 has also used the word marks of the petitioner i.e., SPORTS and POLO. The court also stated that the difference between the logo of both the parties are not significantly different thus is the respondent’s logo is not eligible to be registered as trademark.

The court also focused upon Section 45 (1) of the Trademark Act, 1999 stating that the while applying for the registration of marks the application must include a statement to the effect that no trademark identical with or deceptively similar to such artistic work has been registered or no application has been made under the aforesaid Act for such registration by, any person other than the applicant. The court affirms that the respondent No. 2 has failed to fulfil the duty of inquiry as per Section 45 (2) of the act. If the respondent no. 2 had gone through the records of registered trademark would have not granted registration in favour of respondent no. 1.

The court while stating the case of Marico Ltd. v. Mrs. Jagjit Kaur, 2018 SCC OnLine Del 8488 while dealing with the issue of rectification of copyright had observed as under:

The court also observed that the petitioner registered trademark i.e., “POLO SPORT” & “horse with a person riding it while flinging his club to hit a ball in the sport of polo” are widely used in the market since 1967.