“As long as the music’s playing, you’ve got to get up and dance”  – Charles ‘Chuck’ Prince

NFTs and the music industry have the idyllic chemistry for a much deeper connection, but IP limitations and regulatory scepticism raises problems of ‘authenticity’ and ‘copyrightability’.

NFTs are the world’s first digital Veblen goods.[1] Non-Fungible Tokens (NFTs) are unique digital certificates, which are minted on a blockchain and are used to represent digital assets on the Internet. The ‘non-fungible’ label implies that these tokens are non-interchangeable and thus, each NFT contains distinct information. In simpler words, an NFT creates a blockchain-based digital certificate for representing ownership of digital assets on the Internet (games, paintings, music records, tweets, etc.). A defining characteristic of these tokens is that they are used to merely represent digital assets such as artworks, videogames, pictures, and music, and that they are not the asset itself. A title deed representing the ownership of a piece of land is the closest analogy to familiarize our readers with this concept.  The commercial value of an NFT derives from its ability to prove authenticity and ownership of the asset or digital artwork it represents. A unique attribute is that each NFT must have only one owner and the data on transaction history is stored in a publicly verifiable, immutable digital ledger. The value of a non-fungible token, like any other real-world speculative asset, is determined by the laws of demand and supply.

In an industry characterized by artist’s sharing profits with record labels and streaming services, NFTs offer a new horizon for artists looking to generate an independent revenue stream. Aside from artist collectibles, memorabilia and signed merchandise being offered by numerous artists, NFT’s now encompass concert tickets, exclusive performances, interviews, and deluxe edition albums. The blockchain can store almost anything as a limited-edition collectible. While producing or minting a music NFT, the principle remains the same as other NFTs: the musician or artist will first decide what they want to sell, be it a song, concert tickets, or artist merchandise. Next, they pick the preferred blockchain on which the NFT will be minted. After selecting the platform of choice, the artist informs its fans of the release of their NFT, and price the said NFT at whatever value it deems fit.

The impact of NFTs on the music industry is uncertain, questionable and highly speculative; with certain people advocating for non-fungible tokens as they help in building stronger artist-fan relationships, while others are sceptical about their use, basing their arguments on the inherent limitations of copyright law, issues of anonymity, authenticity, and exploitation of moral rights of the copyright holder.

The transfer of a token merely transfers the ownership right over that token and does not inherently transfer copyright(s) that subsist in the creation of the token itself, that is to say that the true content ownership remains with the creator, regardless of its replication in the digital fora. For example: an NFT of an iconic musical performance is minted and sold, then the IP in the digital token will vest with the relevant authorities and record labels, and the buyer of the NFT cannot commercially license, reproduce, or transform it in another form.

Infringement of the copyright subsisting in the original work may be accompanied by a breach of the moral rights of the author. Moral rights infringement may occur when an imposter misrepresents his position as the copyright owner in the underlying asset. This method of undercutting the authenticity of NFTs is easily realizable due to the anonymity features of the blockchain. While all transactions on the blockchain are recorded in an unalterable online ledger, there is no requirement for people to use their real names, identities, or addresses, thereby making it extremely difficult to seek recourse if your work is stolen or imitated. An NFT creator may hide his true identity, or an imposter may create a digital token as to deceive the original and rightful creator of the art.

Therefore, the buyer of an NFT is advised to conduct due diligence before buying the token, as a precautionary measure. As a remedial step, the creator may seek a John Doe order[2] from the court, effectively injuncting the violator from misusing or misrepresenting the true creator’s identity. The existing copyright framework falls short of protecting the intellectual property rights of an original creator, when tackling issues of adaptation or reproduction in an NFT.

Section 38B of The Copyright Act, 1957 envisages moral rights of the performer. Pursuant to this provision, a performer shall have the right to “restrain or claim damages in respect of distortion, mutilation, or any other modification of his performance that would be prejudicial to his reputation”. It is abundantly clear that ‘loss of reputation’ is the critical factor in determining what would constitute infringement of moral rights. The scope of moral rights is still in the nascent stages in India, with the apex court delivering seemingly contradictory judgments in the Amar Nath Sehgal[3] and Raj Rewal[4] cases. The author asserts that, while transacting through NFTs,  ‘loss of reputation’ is not a relevant consideration neither for the performer (since the token provides 100% ownership to the artist and a robust mechanism to distribute his work); nor the NFT owner (who buy NFTs for increased accessibility, customization, and ease of use). Non-Fungible Tokens do not generally involve creations that would damage the reputation of the original author. Analysts believe that many users are buying tokenised collectibles to use them as a store of value or “as a symbol of social status”. Therefore, moral rights are incapable, or rather insufficient, to address issues of infringement in the crypto space.

Similarly, the NFT framework leaves a lot of room for misappropriation of celebrity and personality rights. For example: if you search Tom Holland on OpenSea, the search displays 193,948 results. It would be ludicrous to believe that Tom Holland authorized the minting of each of these NFTs. Much like in Jordan v. Jewel Food Stores,[5] the actor’s image is being commercially exploited and thus, Spidey’s sense ought to tingle against anyone found profiteering from selling his image.

Electronic artist Jacques Green has earned almost $28,000 from streaming his track, “Another Girl” since 2011 when it first came out. Skip to February 2021 when Greene sold a captivating audio loop and GIF of his new song, “Promise” for 13ETH ($16,000). Electronic music duo, Disclosure produced a new song on Twitch and sold it as an NFT. More recently, The Recording Academy partnered with OneOf , an NFT platform owned partly by legendary producer Quincy Jones. The deal commemorates Grammy winners and nominees for the 64th, 65th and 66th annual Grammy awards and provides for digital collectibles to be released. The fascinating leap from streaming music on Spotify and Apple Music to selling unique, customizable tokens presents exciting prospects for all musicians.

Through this table, Delphi Digital has compiled a list of artists who have engaged with their fans via NFTs: 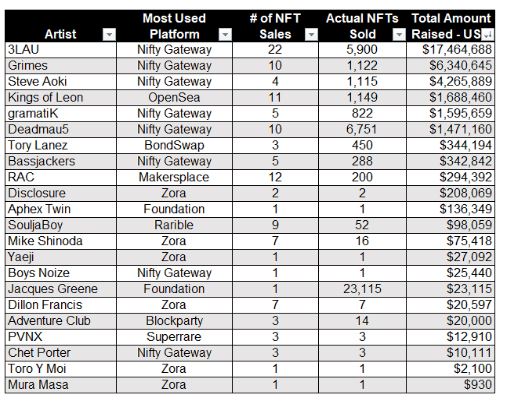 Correctly termed as the ‘year of the NFTs’, 2021 witnessed NFT’s being linked to all kinds of creative works ranging from digital art, videogames, pictures to stickers, GIFs, tweets; and WWE to NBA to even Taco Bell have now introduced personalized tokens. Music artists including Gorillaz, Calvin Harris, Kings of Leon, Shawn Mendes, Jay Z, Shakira, Mike Shinoda from Linkin Park and Steve Aoki have all jumped on the NFT bandwagon – in search of  a ‘tech-art utopia’ and fostering stronger relationships with their fans.

It is ingrained in most legal systems that only an artist can create an NFT out of their creation, despite the creation being available on music platforms, streaming websites, and various illicit sources. The increased proliferation and fervour around the use of NFTs is attributable to the potential advantages they offer:

Despite promising better relationships with fans and boosted royalties for the artist, NFTs are often deemed as “luxuries for the wealthy”, those reserved for the industry’s uppermost echelon. A classic example demonstrating this lacuna would be the difference between median incomes of a casual independent artist with that of, let’s say, a self-acclaimed ‘independent’ artist like Chance the Rapper. In 2017, the Music Industry Research Association surveyed musicians and found that the median income for  independent artists in the US was under $25,000 per year. In stark contrast, American rapper Chance the Rapper, whose ‘indie’ status has regularly been a subject of controversy, reported a net worth of $33 million in 2021. According to a Citi GPS report, musicians only receive 12% of the money generated by the music industry. Spotify pays between $0.003 and $0.005 per stream on average. So, if you’re an artist whose song reaches 1 million streams on Spotify, Hooray! You have just gained……$3,000.

The reason behind such astonishing disparity is that the antiquated music business is highly centralized, with the three giants- Sony, Universal and Warner controlling the lion’s share of the industry (estimated between 66-80% of market share). Thus, the proliferation of non-fungible tokens offers a way forward for a radical reorganization of value creation, especially for budding artists.

In the last two decades, the perception of owning music has significantly dropped due to the rise of streaming services, torrents and digitization of music through platforms like Napster and Limewire. Overall, NFTs are believed to create a more enriching experience for the fans and a better financially rewarding situation for the musician.

However, one final factor to be considered before encouraging NFTs as a tool to commercialize music records is their environmental and social cost. Last year, Cryptoart.wtf equated Space Cat’s[6] carbon emission to a EU residents’ electricity usage for two months. Contrastingly, Quincy Jones’s “green” marketplace (OneOf) is built on the Tezos blockchain and claims to use “over two million times less energy than other blockchain networks.” In fact, it has been boastfully claimed that using Tezos to mint an NFT uses as much energy as “sending out a tweet”.  Another brilliant example of environmentally sustainable crypto mining is the development of a self-sustainable system, which will be employed to mint NFTs to facilitate distribution of Zero Contract, an Anthony Hopkins-starrer movie, with a projected “zero carbon footprint”.

The above instances point towards a forthcoming tech-music renaissance, but the fact remains that non-fungible tokens inexorably reflect the socio-economic dynamics of the art, tech and music worlds. The NFTs are in the middle of a hype-cycle and their environmental impact must not be ascertained by whether they degrade the environment, but rather to what extent they do it. Questioning the long-term environmental sustainability of NFTs, along with concretizing the legal mechanisms addressing consumer protection, creator rights and copyright limitations, is the need of the hour. These measures would go a long way in changing the trajectory of the music industry forever.

[1] Veblen Goods, named after Torsten Veblem, represent a certain class of products whose value increases the more sought after they become. Veblen goods appreciate in value depending on their rarity and exclusiveness.

[2] A pre-infringement injunction order used by courts to safeguard the intellectual property rights of the rightful creator/artist/musician, before infringement occurs. Three conditions that must be satisfied for the court to issue a John Doe order: (1) Establishment of a prima facie case by the plaintiff; (2) Plaintiff must proof that he/she will suffer real, probable, or irreparable losses, if such an order was not passed; (3) Plaintiff must win on the balance of convenience.

[6] A GIF of an astronaut cat going to the moon.